Choria configuration, despite efforts with Puppet module and so, is still very challenging. Just knowing what settings are available has been a problem.

We tried to hide much of the complexity behind Puppet models but for people who don’t conform to the norm it’s been a challenge.

I eventually want to move to a new configuration format - perhaps HCL? - but this is a massive undertaking both for me and users. For now we’ve made some effort to give insights to all the known configuration settings on the CLI and in our documentation.

First we’ll publish a generated configuration reference in CONFIGURATION.md - for now it’s in the Git repository we’ll move it to the doc site eventually.

As of the upcoming version of Choria Server you’ll be able to query the CLI for any setting using regular expressions. The list will show descriptions, data types, validation rules, default values, deprecation hints and URLs to additional information. 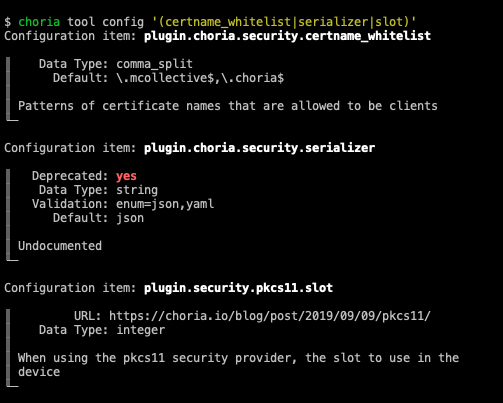 These references are extracted from the Go code - something that I never imagine is possible - read on for details on how that is done.

In our code a typical Configuration data item looks something like this:

To tie this together we have a package github.com/choria-io/go-choria/confkey that can operate on a structure - though not parse the files, it’s just for struct manipulation:

You can extract various related items from the struct tags:

For validations we support a lot of systems related things, times, enums, ip addresses, v4 address, v6 address, max length, regex and shell injection protection. This is all supported by the github.com/choria-io/go-choria/validator package.

Finally you can extract a confkey.Doc object for any Field:

With the above we can quite easily parse the INI file format and load the values into our Go structs at run time, magical data type conversion and Environment overrides are supported etc. We even have comments in the struct like in the LogFile case.

I wanted to though support normal comment blocks since writing longer descriptions isn’t practical in those struct tags.

Above we have the LogLevel field with Programmer comments and everything past the @doc would be shown to users, the LogFile would take the longer comment string and not The log file when shown to the user. So this means we have to look at the code around compile time.

Essentially I want to end up with a bit of code generated that looks like this:

I can then easily override the Description() from confkey when there is a matching docStrings entry.

The Go team has made the Go parser accessible via the package go/parser, and it’s quite easy to use, here I read config.go and parse out only the Config structure and it’s comments. I’ve specifically kept it a bit sparse for the sake of blog post length, the full gen.go shows how the docStrings are made.

This was quite easy, certainly a lot easier than any other time I tried to mess around with code parsers so this was quite a nice experience, kudos to the Go team.