The Choria Provisioner is a niche component that can onboard Choria Servers into a Choria environment without needing Puppet or other CM. I often refer to this as light-bulb mode, ie. a IoT device style on-boarding rather than traditional CM.

I’ve written in the past about this in Mass Provisioning Choria Servers for background.

Today I want to talk about upcoming changes to significantly improve this process from a security and reliability perspective and talk a bit about what is next.

Read on for more details.

Till now Provisioning mode Servers would connect in the clear to a dedicated broker (often hosted in the Provisioner itself), where a single Provisioner would handle on-boarding these nodes.

This presented a few problems - the most obvious is that tokens and such would be traveling over the network in the clear - but also that the entire Provisioning flow was a big single point of failure as it did not support running multiple Provisioners.

We set out to address this in recent work, as of the next release of the various components the provisioning would happen against the same Brokers as where your fleet runs. You probably already invest in making those highly available - so we want to use that investment. 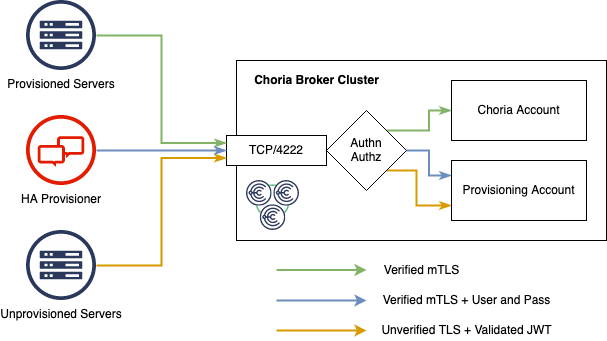 The above diagram shows the basic flow from a TCP and NATS perspective going forward, this requires some explanation.

The Choria Broker supports multi tenancy, 2 tenants on the same Broker do not share any information at all between them by default. Sharing is possible but no sharing by default.

This means in the above diagram that any connection associated with the Provisioning Account is entirely isolated from those in the Choria Account.

This is a key concept to understand, the Broker authentication and authorization will ensure that any server presenting itself for provisioning will be placed in the Provisioning Account. It will also ensure that the Provisioner is running within that account.

The end result is an entirely separate network within the same shared infrastructure. Think of it like a VLAN.

Provisioning is off by default, back in the day you would have had to recompile Choria yourself to gain the ability to auto provision it.

No more, since a year or so you can place a signed JWT file on the server that instruct it to support entering provisioning.

When placed in /etc/choria/provisioning.jwt, and without a valid configuration, Choria Server will enter Provisioning.

The Broker will only accept servers presenting this token and if it’s been signed using the provisioner-key.pem.

Finally, we can talk about TLS in the above diagram. Any Choria Server or Client must be over a fully mutually validated TLS connections aka mTLS. Without recompiling everything there are no exceptions.

The problem with Provisioning is that at the point of Provisioning the Server does not yet have a valid TLS Certificate signed by the CA - delivering this is a major task of the Choria Provisioner.

So we now support a mode where we accept a mix of Verified and Unverified connections when Provisioning is configured. By default, we are still only ever full mTLS. This is something you have to enable.

Unverified connections are subject to a number of mitigating checks:

This means a) any connection that’s unverified will be isolated from the fleet b) the only component that can provision node MUST use fully verified mTLS.

Together this means we have a secure on-boarding process, safe from snooping and token leaks.

Enabling this mode is quite easy on the broker:

Here we say any incoming Provisioning mode server must present a JWT that will be verified using /etc/choria/provisioning-signer.pem and we say the Choria Provisioner will log in with that password. Both have to be set to enable any Unverified TLS connection.

In the past the Choria Provisioner could not be run more than once per network. Since introducing Choria Streams we can now do Leader Election against that component.

So, if the Choria Brokers support Streams, you can set the Provisioner to do Leader Election and start as many as you want.

We are not very aggressive with the Election Campaigns you will see 10 or 20 seconds of outage during a Failover but that’s completely acceptable for this use case.

Next Steps and Conclusion

Provisioning is quite niche, but, it’s something that I see will take a bigger role in the future, I’m investing in making this robust and safe before expanding its role.

Today it only support TLS enrolment and Configuration, we will expand this: